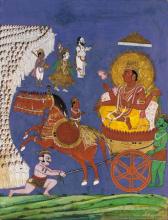 In January, Hindus celebrate Makara Sankranti - a 4-day festival celebrating Surya, the Sun god. This festival occurs at the same time every year, somewhat unusual for Hindu festivals which typically follow a lunar-based calendar. In this part of the US, Sankranti occurs from January 13-16, with the main day on the 14th. The date is based on astronomical calculations and marks when the sun begins its northerly migration from the Tropic of Cancer to the Tropic of Capricorn. Makar is the Capricorn zodiac and Sankranti refers to the movement from one zodiac sign to another. Of further significance is the passage of time; Hindus believe that one human year is equivalent to one day for the gods. Makara Sankranti marks the end of night-time for the gods and the dawning of a new day; for humans, it marks a transition to a more auspicious time out of darkness (long nights) into light (longer days). Festivities vary across India. One popular practice among farmers is to bathe their cattle, polish their horns and hooves, handsomely decorate them with colorful paints, garlands and bells and lead them in a procession. At the end of the procession, the cattle and handlers jump over a bonfire. These rituals serve as protective wards against evil and symbolize the bond between humans and nature.

There are other non-agricultural regional traditions associated with the festival. These include taking a dip in a holy river (a rather cold prospect on a January day in New England!), flying kites, drawing rangoli patterns, and eating sweets cooked with sesame seeds.

A final note - in 1863 the future Swami Vivekananda was born a few minutes after sunrise on Makara Sankranti.

Let’s hope that the sun shines strong upon us during Sankranti!

Information about the painting: