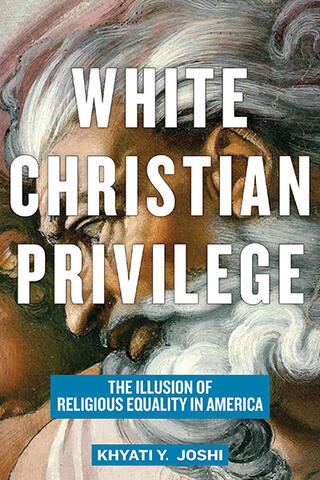 Register for this event by clicking on this link. Registration closes at 1 PM on 3/15/2021

Join us for a conversation with Dr. Khyati Joshi, professor of education at Fairleigh Dickinson University, about her powerful new book White Christian Privilege.

Joshi’s book takes a legal and sociological approach to examining whiteness and Christianity, arguing that “Christianity (particularly the European Protestant strain) has been established as the unacknowledged common culture, not simply religion, of the United States, leading to a situation where anything not white, Western, and Christian is seen as abnormal (Publisher’s Weekly).”

Joshi’s arguments clearly draw a line from the laws, norms and attitudes at the founding of the country to the beliefs and norms (and legal frameworks) that led to the development of current US politics. Most important – Joshi offers a path towards a more inclusive America.

“Joshi explores the structures of white Christian privilege embedded in American institutions, laws, and culture … insightful … outlines examples of those who have the privilege but are blind to it, and some of the inequities suffered by uneven privilege. Recommended for readers interested in historical roots of religious freedom.” ~Library Journal

“Smart and timely, energetic and approachable, this book is destined to be one of those touchstone texts that finds its way to a varied audience eager both to learn and to make meaningful change in American culture.” ~Philip Goff, Director, Center for the Study of Religion and American Culture, Indiana University-Purdue University Indianapolis

“Insightful and provocative. Taking a social justice approach, this timely book explores how Christianity has been leveraged to maintain and reproduce structures of domination and subordination, a discussion that is much needed and most welcome as debates about borders, migrants, and citizenship inflect public policy and civic engagement.” ~Zayn Kassam, John Knox McLean Professor of Religious Studies, Pomona College

This talk is sponsored by: