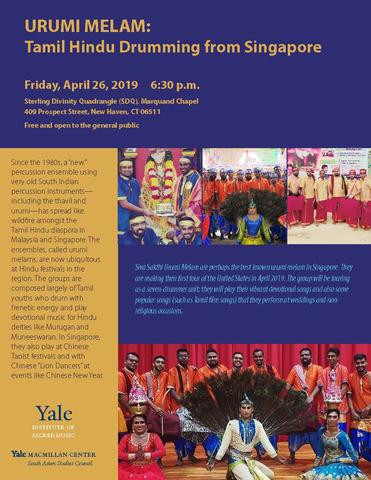 Since the 1980s, a “new” percussion ensemble using very old South Indian percussion instruments—including the thavil and urumi—has spread like wildfire amongst the Tamil Hindu diaspora in Malaysia and Singapore. The ensembles, called urumi melams, are now ubiquitous at Hindu festivals in the region. The groups are composed largely of Tamil youths who drum with frenetic energy and play devotional music for Hindu deities like Murugan and Muneeswaran. In Singapore, they also play at Chinese Taoist festivals and with Chinese “Lion Dancers” at events like Chinese New Year.

Siva Sakthi Urumi Melam are perhaps the best known urumi melam in Singapore. They will be making their first tour of the United States at the end of April and hope to play at Yale on April 26th. The group will be touring as a six-drummer unit; they will play their vibrant devotional songs and also some popular songs (such as Tamil film songs) that they perform at weddings and non-religious occasions.

This event is free and open to the public. No registration required.