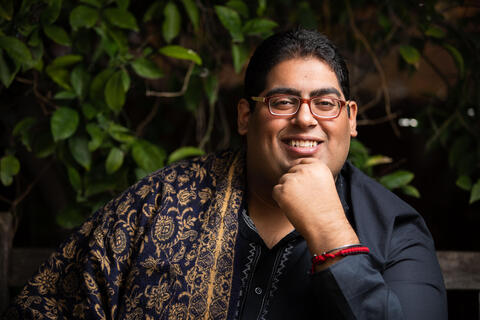 Interested in social justice activism as an expression of your faith? Join us for an evening with Tahil Sharma, United Religions Initiative Regional Coordinator and a Director of the University of Southern California Hindu Students Organization.

Tahil will share his personal journey as a gay American-born Hindu and Sikh working in the social justice and chaplaincy/spiritual care-giving domains.

Tahil is a contributing author to several books including the recently published text Acting on Faith, a compilation of reflections by social justice workers representing numerous faith traditions that offers excellent context for his work channeling Dharmic spirituality for the public good.  He has also contributed to the first book on Hindu chaplaincy Hindu Approaches to Spiritual Care.

This event is free to the Yale community. Please click here to register.

More about our speaker:

Tahil Sharma is an interfaith activist based in Los Angeles who was born to a Hindu father and a Sikh mother. Following the Oak Creek, WI shooting of a Sikh temple in 2012, Tahil became involved in efforts for interfaith literacy and social justice and has been doing this work professionally for the past seven years. Tahil serves as one of three Interfaith Ministers in Residence for the Episcopal Diocese of Los Angeles and as the Los Angeles Coordinator for Sadhana: A Coalition of Progressive Hindus. Tahil also serves various organizations in different capacities to educate, engage, and serve various communities that promote interfaith cooperation and ethical pluralism and social and productive norms in society including the Interfaith Youth Core, the Parliament of the World’s Religions, The Guibord Center, and The Interreligious Council of Southern California. Tahil previously worked as the Faith Outreach Manager for Brave New Films, a social justice documentary organization based in Los Angeles that empowers communities and teaches civic participation through new media, facilitation, and strategies for action. He is also a contributing author to books including Co-Human Harmony: Using Our Shared Humanity To Bridge Divides, Hindu Approaches to Spiritual Care: Chaplaincy in Theory and Practice, and Acting on Faith: Stories of Courage, Activism, and Hope Across Religions.