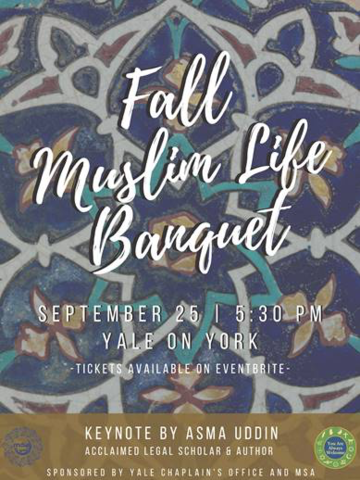 We will be suspending our Hindu Life activities on Wednesday September 25 in order to join our Muslim colleagues in a celebration of faith and community. The event announcement from Imam Omer Bajwa, Director of Muslim Life, is below. Please join us!

The Chaplain’s Office and Muslim Students Association are pleased to invite you to our Fall Muslim Life Banquet, formerly known as the Eid Banquet, on September 25th @ 5:30 PM at Yale on York.  Doors open at 5:00 PM.

Please join us as we celebrate the unique diversity of the Yale community as we enjoy delicious food, reflections from students, and a keynote by Asma Uddin.

Asma T. Uddin is a religious liberty lawyer and scholar working for the protection of religious expression for people of all faiths in the U.S. and abroad. She is the author of the critically acclaimed book “When Islam is Not a Religion: Inside America’s Fight for Religious Freedom” published earlier this year.  Uddin has worked on religious liberty cases at the U.S. Supreme Court, federal appellate courts, and federal trial courts. She has defended religious claimants as diverse as Evangelicals, Sikhs, Muslims, Native Americans, Jews, Catholics, and members of the Nation of Islam.  In addition to her legal work, Uddin writes and speaks on Muslims and gender. As the founding editor-in-chief of altmuslimah.com, she has managed the web-magazine, and organized vigorous debates and conferences on the multifaceted issues of gender, politics, and religion. Uddin has advised numerous media projects on American Muslims, including most recently as Executive Producer for the Emmy and Peabody nominated docu-series, The Secret Life of Muslims.